I'm digging up this old thread to post my impressions on my recent trip to Düsseldorf, Germany. Just like 2 years ago, I attended this year's annual Japan day on Saturday. It's not a convention (everything's open-air), but the overall atmosphere, I would imagine, is pretty much the same. Now I'm experiencing what I can only assume to be an equivalent of the dreaded "post-con blues" - it feels mildly depressing not being surrounded by awesome people in cosplay anymore :/.

On the bright side, I did get to see a ton of cosplayers, as expected. They're really the only reason I made the trip in the first place, and it was worth it. Unlike the last time I went, I actually worked up the nerve to talk to a couple of them. Mostly just a sentence or two, but I wanted to show them that I recognized their characters (many of which aren't exactly mainstream, at least not in Germany). I talked to:

There was a Yoshino from Date a Live, which I found awesome, so I called out her (character's) name, but she didn't hear me. (BlueSpark fail #1)

Tohru from Miss Kobayashi's Dragon Maid: I told her that I'd gladly try a bite of her tail - to which she then presented a plushy of a piece of severed dragon tail and let me fake-nibble on it

. One of the day's highlights for sure.

Silica from Sword Art Online: She was holding a plushy that was clearly not-dragon-shaped. I embarassed myself by asking whether it was her Pino. She told me no and corrected me that her pet is in fact called Pina. Awkward. (BlueSpark fail #2)

Taiga Aisaka from Toradora!: I likely wouldn't have recognized the character if the girl didn't have a plushy of the show's signature pint-sized tiger on her shoulder. I complimented her on that detail. In hindsight, I regret not talking with her a bit more, about the show, for example; Toradora! is one of my all-time favorites, after all.

There was a D.va from Overwatch (video game) who didn't stand out to me because of her cosplay, but because she was standing in an empty area off to the side, next to a guy playing guitar - and she sang "Zen Zen Zense" (a RADWIMPS song played in Your Name) in Japanese. Like a lone (but happy) fool, I briefly applauded after she was finished

Zero-Two from Darling in the FranXX: She was the first of 2 two Zero-Twos I saw at the event, which felt odd because I figured she'd be a hugely popular character for cosplays. She told me that she'd seen two more. But yeah, overall, Zero-Two wasn't nearly as popular as Asuna, Yuno Gasai, Rem, or Ram. I let her know that I appreciated how she'd added a lollipop as part of the costume - that was a neat touch :>.

Elias Ainsworth from The Ancient Magus' Bride (accompanied by Chise): This guy's cosplay was very elaborate, especially the mask, of course. Small problem was that I'd completely forgotten the name of the character, so I had to ask him. (BlueSpark fail #3)

Overall, things went much smoother this time than they did 2 years ago (regarding the train ride, my lunch, and the slightly milder temperature). To combat my depression from being thrown back into a normie environment, I've been looking up some YouTube videos on the Japan Day, but it's not really helping. Nevertheless, it's a great memory made.

Oh, by the way, my brother went into crazy cosplay mode, himself, and went as Lilligant (Pokemon, 5th generation). I'll upload a photo when I get home tonight.

Know a decent number of anime characters? Check out my forum game!
Top

Whoops, totally forgot to upload the photo of my brother's costume - here it is (100% self-made): 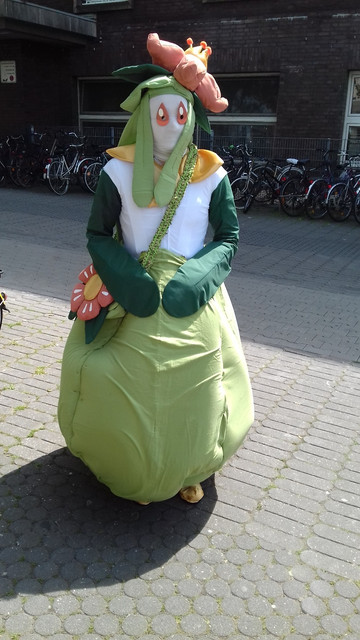 Know a decent number of anime characters? Check out my forum game!
Top

I will be going to AniMaGa (Anime Manga Game) this weekend, a yearly Australian anime convention. I wasn’t able to go last year cause I had to save money during that time but I went in both 2016 & 2017. This is the smaller of two big anime conventions that happen around the same time each year. (The bigger one is next month) but tbh I have always preferred AniMaGa.

I always love going and obviously I’m going to end up with a fair bit of loot so I’ll be sure to make a post about what I get too. There’s also going to be some Japanese voice actors coming over and one of them I’m really hoping to meet and get some stuff signed so hopefully that’ll go well. I’m going both days so I’ll have plenty of time to take it easy and just try to enjoy it. I tend to like Sunday more cause less people are around and I’ve already had the first day to get my bearing and learn the layout of the whole place.
Everything I say is in relation to me, objectivity doesn't exist.

AniMaGa 2019:
Was so fun to be able to go again, and I'm really glad I went. I'll throw down the merch I got in a more sutible area but I really enjoyed it, always love going to conventions. Most interesting thing that people on here would care about is the quests.

We Na-Ga from Key, who's been doing art on the games from very early on and is now a lead art director for them, along with Kai who's a scenario writer at key. It's key's 20th anniversary this year and so they also had a poster that had the main girl from all their games on it and it was an exclusive for this event apparently. So I got that poster and got both of them to sign it.

Asami Sanada was the highlight for me tho, which tends to be the case with convention quests, I tend to care about the Seiyuu the most. Sanada is most famous for being Sawa-Chan sensei in K-On, Vita is lyrical Nanoha and Kurumi in Date a Live, but she's done a lot of roles. I went to her Q&A on the first day and her signing on the second day, got her to sign my K-On movie DVD and I'm really happy that I have that!

Some interesting things from the Q&A are firstly I asked her what her favorite role is, which obviously she had to respond with 'All of them' although based on what she said throughout the entire Q&A it was clear that she had a fondness for doing Kurumi and Sawako as only once did she mention a specific role that wasn't one of those two.
I asked her what roie she would like most to return to out of what she hasn't done in awhile, she actually gave a really interesting answer for this one, saying that she would like to do all of them at a party together and now that's something I really want to see. For copyright reasons this'll obviously never be a thing but how cool would voice actor show cases be where all the characters they voice interact at a meet up, that'd be really cool stuff.
Other questions that I found notable was she was asked about the difference between Australia and Japanese conventions and she said the biggest one was the amount of cosplay, saying Australia has a lot more then Japanese ones, which surprised me. There are always a lot of cosplayers at Australian conventions tho but I had just assumed it was normal cause it was all I knew. Either way she said she liked it as she could look around and see a lot of people enjoying the things they love.
Someone also asked what club's she had joined when she went to school. And she said that in Middle school she did Tennis and then in high school did dance. They then asked what kind of dancing she did and she got really embarrassed and said it was idol dancing.
She also talked a lot about how much she has to protect her voice. She wears a mask a lot, even at night when she sleeps and always has a humidifier in her room. She also obviously drinks a lot of water and says she always has to drink warm water cause if her voice isn't warm when she does her work then it strains it, which I guess is obvious but I never even thought about it.
And lastly, she's an absolute cutie. This is important.
Everything I say is in relation to me, objectivity doesn't exist.

Its been over a year now since I been to a Con... Nothing beats Fanboying out with a number of other people and buying Merch in person....

SeismicWolf wrote:Its been over a year now since I been to a Con... Nothing beats Fanboying out with a number of other people and buying Merch in person....

Yer, my last post about AniMaGa in 2019 is still the last anime convention I went to. I went to another video game one towards the end of 2019, but since COVID hit all the usual ones I go too were cancelled last year. They tend to happen near the end of the year in Australia so hopefully this can all be sorted and there can be such a huge meet up by the end of the year and I can go to one again, miss them a whole lot.

Australia is a big place with a small population and the entire country is the entire continent. So we're closer to getting this whole COVID thing under control compared to most, but even NZ had it come back after 100 days without it, so who knows how long it'll really take to be 100% sure.
Last edited by Eira on Mon Mar 08, 2021 8:06 am, edited 1 time in total.
Everything I say is in relation to me, objectivity doesn't exist.

SeismicWolf wrote:Also trying to send the Spam Topics to the Bottom of the Forums

I'm afraid you're fighting a losing battle there

, but your intentions are noble.

I'm also a bit bummed that the convention-esque "Japan Day" in a nearby town was cancelled last year and probably will be this year, too :/. At least I don't see mass events like that returning anytime soon, even if it is all outdoors.